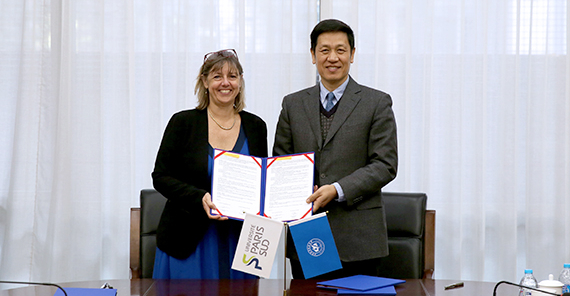 Beihang to exchange students with UPSud

Beihang marked a milestone in its relationship with one of France’s premier universities, Université Paris-Sud, paving the way for a student exchange program.

Under the student exchange agreement, Beihang students will undertake a semester of study in engineering, science, law, economics or management at Paris-Sud.

It is proposed that students from Paris-Sud will also undertake study visits to Beihang.

In addition to the student exchange agreement, Professor Xu and Professor Retailleau also renewed the Memorandum of Understanding between the two universities.

Professor Retailleau said the renewed partnership between Beihang and Paris-Sud would lead to many new opportunities for cooperation.

This is the first visit to Beihang by Professor Retailleau during her term of office. She was accompanied by Professor Sandrine Lacombe, Vice President of International Affairs of Paris-Sud, and Professor Ming Zhang, Project Manager for International Relations with China.

Professor Huang Haijun, Vice President Academic and International of Beihang, gave a presentation to the French delegation explaining how Beihang had evolved and developed in the recent years.

After the meeting, the French delegation visited Beihang’s Interdisciplinary Research Center for Spintronics and Lunar Palace I.