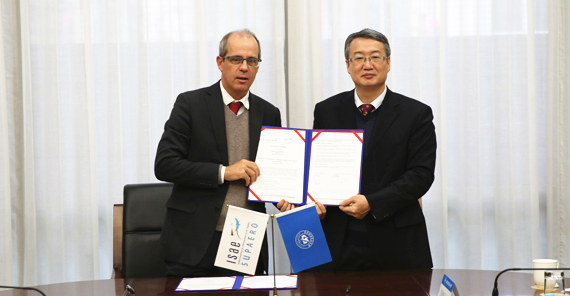 ISAE-SUPAERO, based in Toulouse, is one of the most selective grandes écoles in France and a world leader in aerospace engineering higher education.

Beihang and ISAE-SUPAERO have signed an agreement confirming and extending the two institutions’ relationship, which was first formally established in May 2010.

The agreement was signed on November 23 during a top-level meeting between Mr. Olivier Lesbre, president of ISAE-SUPAERO, and Professor Huang Haijun, Vice President Academic and International of Beihang.

They exchanged ideas on further collaboration with senior staff from Beihang’s International Division, International School, and School of Aeronautical Science and Engineering.

Both sides have agreed to strengthen faculty exchanges and research cooperation, on the basis of fruitful student exchange and double degree programs.

After the meeting, the ISAE-SUPAERO delegation visited the Air & Space Museum and the National Key Laboratory of Virtual Reality Technology and Systems.