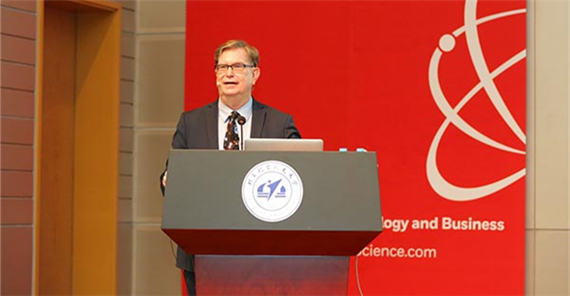 The event was jointly organized by Honeywell and International Division of Beihang.

Nobel laureate and US astrophysicist George Smoot gave a lecture to more than 1,000 students and faculty at Beihang University on Wednesday, explaining how his work provided the strongest evidence for the "Big Bang" theory and urging interested students to pursue careers in science, technology, engineering and math.

Smoot, who won the 2006 Nobel Prize in physics, is an astrophysicist at the Lawrence Berkeley National Laboratory and physics professor at the University of California at Berkeley.

Smoot has appeared in several TV shows and commercials, including the popular TV series The Big Bang Theory.

Among his many honors, Smoot has received the NASA Medal for Exceptional Scientific Achievement, the Albert Einstein Medal and the Gruber Prize.

Smoot's visit is part of the Honeywell Initiative for Science & Engineering, organized by a corporate citizenship initiative of the Fortune 100 diversified technology and manufacturing company.

The initiative aims to inspire university students to pursue careers in science, technology, engineering and math by giving them hands-on exposure to Nobel laureates in physics and chemistry and direct interactions with Honeywell’s top innovators and engineers.

During his visit, Smoot delivered several lectures, shared his experiences about his personal path toward winning the Nobel Prize, and advised students to follow their dreams.

"Don't lose your natural appetite for learning," Smoot said. "With knowledge, you have the power to make your mark on society."

With Honeywell's HISE program, students can experience the power of the academic and business world working together to solve problems, according to Xu Huibin, president of Beihang University.

"At Honeywell, we are blending physical products with software solutions to link people and businesses to the information they need to be more efficient, more productive, and more connected," said Stephen Shang, president of Honeywell China.

Honeywell has brought Nobel laureates to China more than 10 times. The program also has benefited university students in Malaysia, Mexico, the Czech Republic, India and Romania.

In addition to HISE, Honeywell invites middle school teachers from across China to the United States to receive training each year.