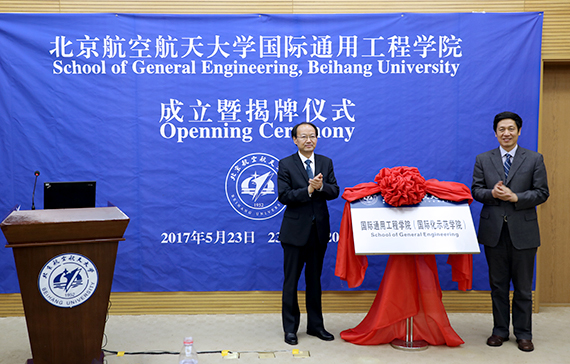 The founding ceremony for the International School of General Engineering was held at Beihang on May 23. Professor Xu Huibin, President of Beihang University announced the official opening of the school. Mr. Zhou Changkui, deputy administrator of the State Administration of Foreign Experts Affairs and Professor Cheng Jiwei, Vice President of Beihang University attended the ceremony.

The International School of General Engineering was created with support from the ’International Model School Project’ sponsored by the State Administration of Foreign Experts Affairs (SAFEA) and the Ministry of Education (MOE) of China. As an ’International Model School’, the school strives to pioneer a broad and multidisciplinary approach to engineering education in China. The school will be running in accordance with international practice, with the majority of modules taught in English by faculty members recruited worldwide, while highlighting the unique characteristics of Chinese higher engineering education. Professor Wen Dongsheng has been appointed as the first dean of the new school.