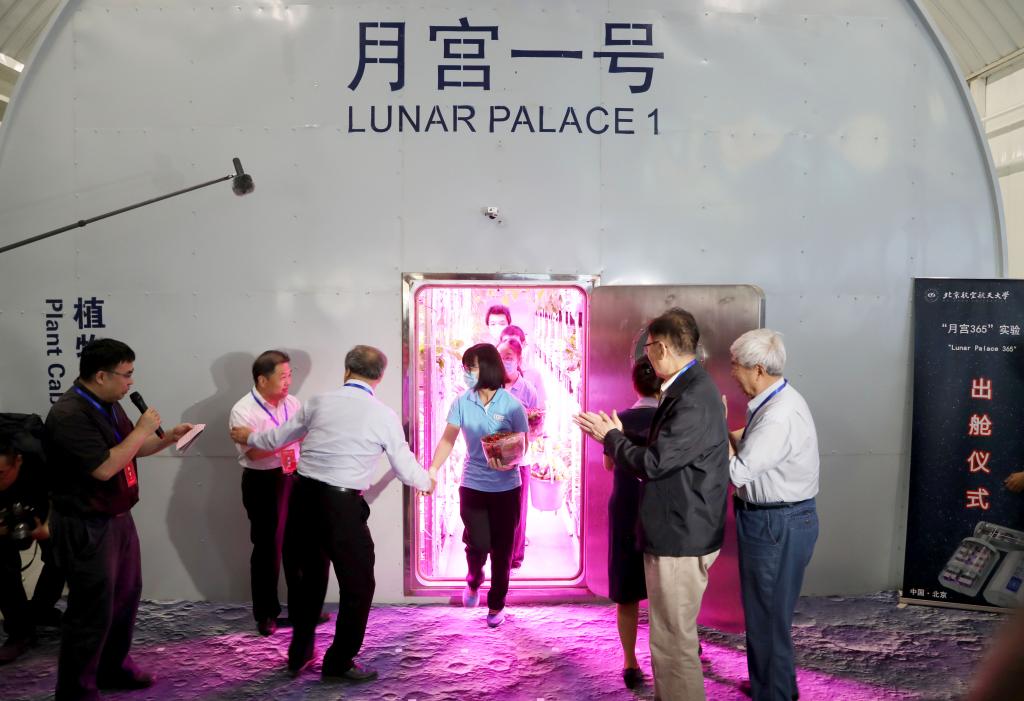 Chinese volunteers have completed a one-year test living in a simulated space lab in Beijing, setting a new record for the longest stay in a self-contained cabin.

BEIJING, May 15 (Xinhua) -- Chinese volunteers have completed a one-year test living in a simulated space lab in Beijing, setting a new record for the longest stay in a self-contained cabin.

Four students, two males and two females, emerged from the Yuegong-1, or Lunar Palace 1, at Beihang University to the applause of academicians, researchers and fellow students Tuesday.

The total length of the test, which started on May 10th last year, reached 370 days, with the third stage accounting for 110 days.

Liu Hong, chief designer of Yuegong-1, said the test marks the longest stay in a bioregenerative life support system (BLSS), in which humans, animals, plants and microorganisms co-exist in a closed environment, simulating a lunar base. Oxygen, water and food are recycled within the BLSS, creating an Earth-like environment.

"The system is 98 percent self-sufficient. It has been stable and effective in providing life support for its passengers," she said.

A total of eight volunteers, all of whom are students at Beihang University, took turns living in the cabin, which measures around 150 square meters.

The BLSS is a critical piece of technology required for long-term human stays on the moon or other extraterrestrial bodies, Liu said.

Researchers will evaluate the physical and mental conditions of volunteers, study test results, and explore smaller BLSS equipment which could be loaded onto space labs, moon and Mars probes in the future.

"The test has important implications for human endeavors to achieve long-term stays outside the Earth. The experience, technology and findings will be conducive for future space exploration efforts," said Wang Jun, an academician from the Chinese Academy of Engineering, as he welcomed the volunteers out of the cabin.

The BLSS can also be applied in areas where water is scarce and oxygen levels are low, he said.

The previous record was set in the former Soviet Union, where three people stayed for 180 days in a similar closed ecosystem in the early 1970s.